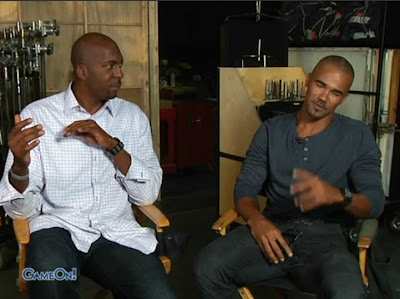 "Criminal Minds" star, SHEMAR MOORE,
and the rest of the cast is interviewed on
John Salley's "Game On"
tonight (Sunday, September 25)
10:00 p.m.ET on REELZ
Here's a clip of SHEMAR'S interview ~
http://www.reelz.com/show/124/game-on-with-john-salley/
Clips of Paget Brewster and A.J. Cook are also posted on
the "Game On" website
Join us at the gathering place for SHEMAR MOORE fans
http://www.lovingmooreandmore.com/
Posted by Dee at 9:24 AM No comments: 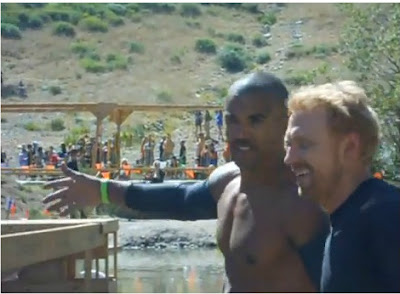 When "Criminal Minds" star, SHEMAR MOORE,
participated in the NorCal Tough Mudders Event
last Sunday, September 17,
he was accidentally caught on video by a woman
filming her friend. SHEMAR comes in at 6:00.
http://youtu.be/0wilAEOmRfU
Visit our Message Board
http://www.lovingmooreandmore.com/
The place for SHEMAR MOORE fans.
Posted by Dee at 10:47 AM No comments: 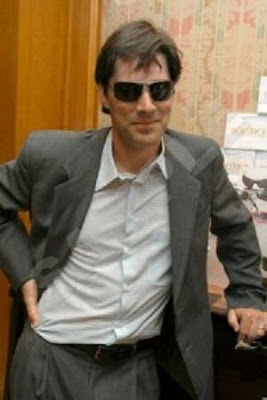 CRIMINAL MINDS star, Thomas Gibson, will be a guest on
"The Talk" on Tuesday, September 27 on CBS.
Check local listings for times in your area.
Posted by Dee at 9:54 PM No comments: 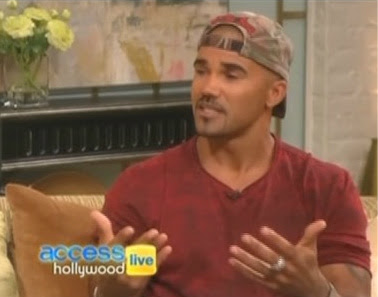 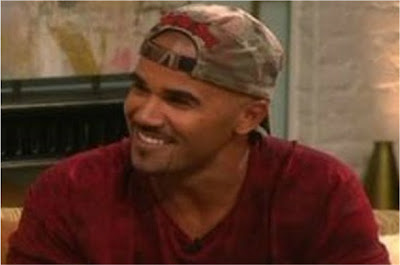 "Criminal Minds" star SHEMAR MOORE talks to
Access Hollywood Live. He had this to say about his
character, Derek Morgan, and romance.
Shemar Moore plays Derek Morgan, an FBI agent in the Behavioral Analysis Unit. Moore talked about his tough-guy character and how the show's writers incorporate real-life crimes into its scripts. He also explained to Kit Hoover why viewers shouldn't expect to see Morgan involved in a love story anytime soon. Moore said he enjoys playing Morgan because of all the "bad-ass" stuff he gets to do. "Derek Morgan's looking for the fight," Moore said. "He's a guy who kicks down doors, is the first one in a burning building and the last one to leave. He doesn't like when the little guy gets picked on." That tough-guy stuff is all well and good, but 'Access' host Kit Hoover would like to see Morgan add a little love to his life. Moore cautioned that she shouldn't hold her breathe waiting for Morgan to get a romantic plotline. There's a true-to-life reason for that, though. "To chase down a serial criminal, you have 72 hours. So basically, there ain't no time for hanky-panky. Ain't nobody between the sheets. Doesn't look like we're going to see too many love scenes from Derek Morgan on 'Criminal Minds.'"
http://www.lovingmooreandmore.com/
Posted by Dee at 1:27 PM No comments: Soap veteran, Heather Tom,
will be one of the guest stars on CRIMINAL MINDS
upcoming episode, "From Childhood's Hour,"
scheduled to air on CBS on October 19.
Ms. Tom has a long history on daytime shows, including
"The Bold and the Beautiful," "One Life to Life,"
and "The Young and the Restless" where MINDS star
SHEMAR MOORE also got his acting start.
Posted by Dee at 12:32 PM No comments: 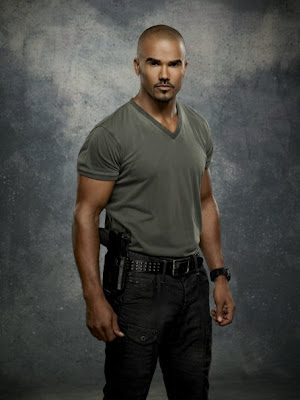 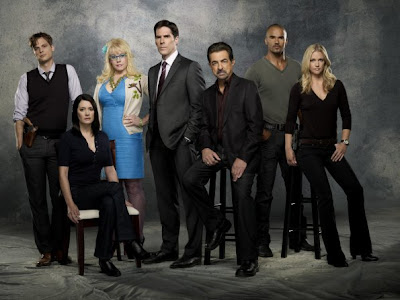 Our cast ~ From left to right
Matthew Gray Gubler, Paget Brewster, Kirsten Vangsness
Thomas Gibson, Joe Mantegna, SHEMAR MOORE,
A.J. Cook
With only one day left until the "Criminal Minds" Season Premier
the new promo photos for Season 7 are out.
So good to see the cast back together again.
More on our website ~
http://www.lovingmooreandmore.com/
The gathering place for SHEMAR fans.
Posted by Dee at 12:13 PM No comments: 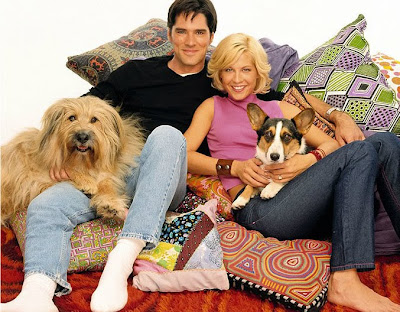 Before he was FBI crime fighter, Aaron Hotchner,
on CRIMINAL MINDS,
Thomas Gibson was Greg Montgomery on "Dharma and Greg."
Pictured above with his co-star, Jenna Elfman,
the couple revised their roles briefly last night on the
season premier of "Two and a Half Men"
Not quite the happy couple they were for five years on the series, the were still hilarious in their guest appearance.
http://www.youtube.com/watch?v=Bb_es0ah5Rs
Posted by Dee at 6:02 AM No comments:

Email ThisBlogThis!Share to TwitterShare to FacebookShare to Pinterest
Labels: Aaron Hotchner, Criminal Minds, Dharma and Greg, Jenna Elfman, Two and a Half Men 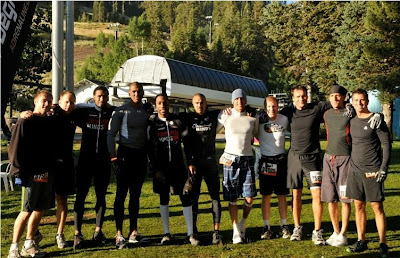 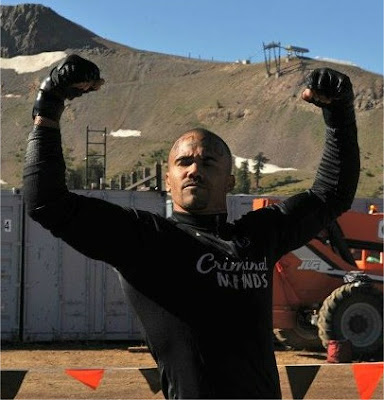 Way to go, SHEMAR!
Congratulations to Criminal Minds star, SHEMAR MOORE, former CM executive, Simon Mirren, and all of the members of Team Stray Dogs who competed in the Tough Mudders Event yesterday at Lake Tahoe (September 18). All of the Stray Dogs successfully completed the course. The team raised money for the Wounded Warriors project while putting their physical and mental abilities to the test. It is not too late to donate to the event. You can view photos of the event and make a donation on their website. ~ http://toughmudder.com/ 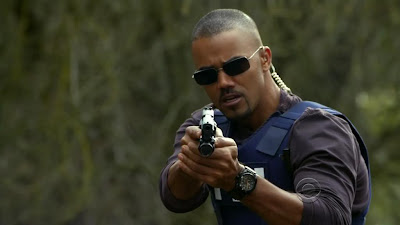 SHEMAR MOORE as Agent Derek Morgan
As the cast and crew of CRIMINAL MINDS begin work on episode 7 of the new season, CBS has released this on episode 7.2.
"Proof" ~ The BAU team searches rural Oklahoma when women are found murdered after being robbed of one of their five senses.
Also, JJ and Prentiss get the cold shoulder from Reid as he deals with their deception about Prentiss' presumed death.
CRIMINAL MINDS Wednesday, September 28 (9:00 PM, ET/PT)
on CBS television network.
Andy Milder (Weeds) guest stars as Cy, a mentally challenged man.
Tracy Middendorf (CSI and Boradwalk Empire) guest stars as Lyla Bradstone,
Cy's sister-in-law
.
Posted by Dee at 6:31 AM No comments:

http://youtu.be/RfPPUO87DL8
OMG! What did our Derek Morgan (SHEMAR MOORE) do to Ian Doyle? 8 more days to find out.
Posted by Dee at 10:55 PM No comments: 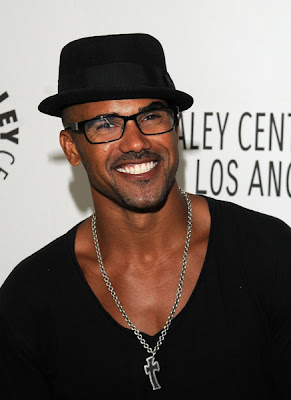 I'm not in very good shape right now,” declared Shemar Moore, but if that’s the case, then heaven help the rest of the guys on the planet. At 41, he’s got the physique of a guy a decade or two younger. “As I get older it’s getting harder and harder, but it’s part of my image to look a certain way, so I’m holding on,” laughed Moore, whose often physically demanding role as special agent Derek Morgan in Criminal Minds helps on that score. The CBS procedural action-drama series, about an elite team of profilers who hunt down serial killers, begins its seventh season on September 21. The show's longevity is something Moore attributes to the cast's chemistry, smart scriptwriting and a realistic, cinematic feel. "It’s like Silence of the Lambsmeets Seven,” he revealed before a fall preview party at the Paley Center for Media in Beverly Hills on Tuesday night.

The show’s crimes tend to be grisly, but Moore isn’t fazed. “I know it’s pretend,” said the actor, up for whatever the role requires. “I’d never owned a gun. I don’t like guns. My mother hates that I carry a gun. But I look like I know what I’m doing,” explains Moore, who relates a lot to his TV character. “He’s a tough guy ... you understand why he has the bravado that he has, but underneath all that [he] is a softie with a big heart, and vulnerabilities and insecurities that justify why he’s guarded. His passion comes from a good place but it gets him in trouble.” Moore considers himself just as passionate, physically capable, and slow-to-trust as his character, “but I’m not as tough, not looking for the fight. I get along with everybody. Derek is a little more hot-tempered.”

While Moore didn’t aim to be a role model, “I just know that, in my actions, in my career and my life, people are watching me around the world and are inspired by me, so I am very aware that my choices matter, but I’m not gonna live my life for other people.” His guiding principle? “As long as I stay true to me. If I entertain you, or if I move you to be better, great, or if you say you feel like you relate to me, I feel that’s a better compliment than asking for an autograph.” 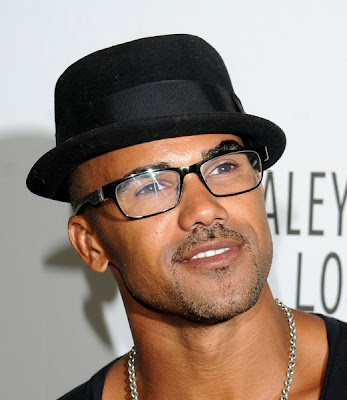 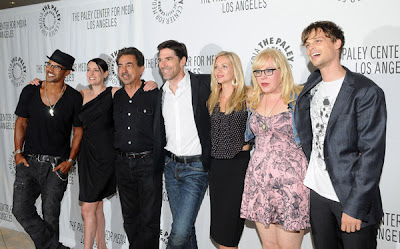 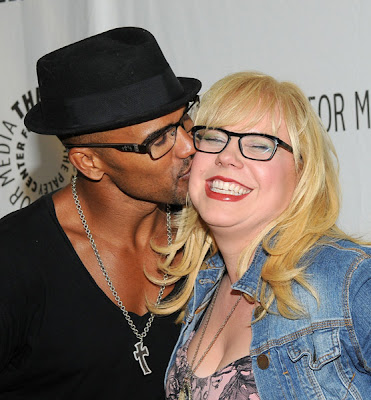 Lucky Kirsten gets a kiss from SHEMAR
The CRIMINAL MINDS cast attends the PaleyFest 2011
on September 6, 2011 in Beverly Hills, California
Visit our LOVING MOORE and MORE...Message Board
The gathering place for SHEMAR MOORE fans
www.lovingmooreandmore.com/
Posted by Dee at 10:52 PM No comments:

The CRIMINAL MINDS cast was at the Paley Center on September 6. SHEMAR MOORE (Derek Morgan) stopped to talk about the series, his summer vacation, and more.
http://youtu.be/EvEUpaJxvhM
LOVING MOORE AND MORE...Message Board ~
http://www.lovingmooreandmore.com/
Posted by Dee at 8:50 PM No comments: 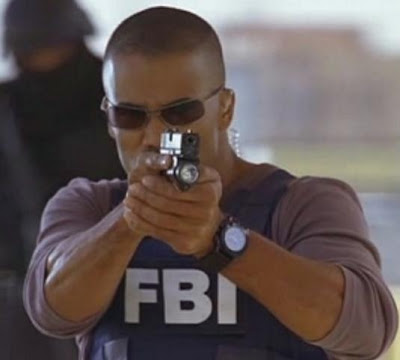 CRIMINAL MINDS Season 6 came out today on DVD.
Some of the extras have been posted on YouTube.
Enjoy them before somebody hollers "copyright violation."
http://youtu.be/SmXZ75EQJPY
http://youtu.be/9-oOEbh6tDk
http://youtu.be/9UMO12jBMt0
LOVING MOORE AND MORE...Message Board
http://www.lovingmooreandmore.com/
Posted by Dee at 9:52 AM No comments:

How Cute is Matthew Gray Gubler of CRIMINAL MINDS? ~ video

CRIMINAL MINDS star, Matthew Gray Gubler, signs autographs at a recent CBS event. Dr. Spencer Reid seems to get more adorable every time we see him.
Posted by Dee at 7:54 AM No comments: 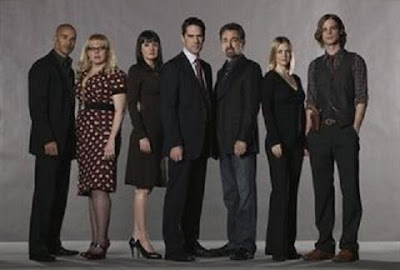 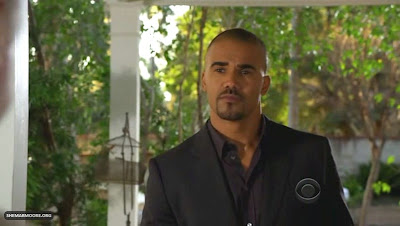 CBS has posted an awesome retrospective video on Season 6
of CRIMINAL MINDS. The Ultimate Look Back ~

TWENTY DAYS UNTIL THE SEASON PREMIER OF CRIMINAL MINDS.
Coming September 21 ~ "It Takes a Village"