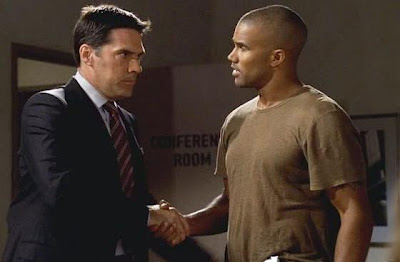 Since the news broke nearly two weeks ago that SHEMAR MOORE and Thomas Gibson have not signed new contracts for CRIMINAL MINDS, fans have been in an uproar. Hopefully, you voted in the Criminal Minds Fantatic poll that you would NOT be watching the series without SHEMAR and Thomas.
Although the poll is closed, there are still some things you can do.
An email can be sent directly to the President of CBS, Les Moonves.
lmoonves@cbs. com
You can also contact Nina Tassler, President of CBS Entertainment.
nina.tassler@ cbs.com
There is also a CBS Feedback Line.
www.cbs.com/info/user_services/fb_global_form.php
Send an email to each address and let them know that you want CRIMINAL MINDS renewed for Season 7, and that you want SHEMAR MOORE and Thomas Gibson to return.
We have to hang together, TEAM SHEMAR. There is a very real possibility that we could lose our beloved Agent Derek Morgan.
Posted by Dee at 9:03 AM